Reasons Why We Need a Startup Act in Nigeria

You are here:
ArticlesStartups Law 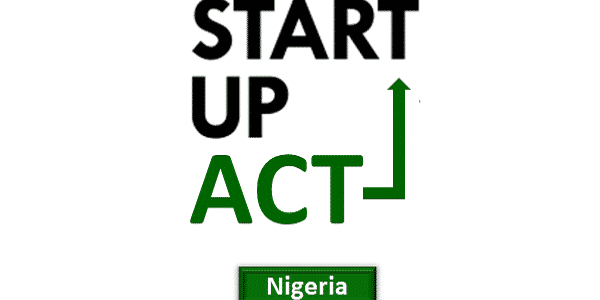 Startup Acts are Africa’s next frontier of policy innovation. If implemented in Nigeria, Startup Acts could catalyze positive change in the broader business environment by increasing local support for entrepreneurs and signaling to global venture capital investors that the country is open for business, thereby spurring innovation, creating jobs, and building trust between the governments and entrepreneurs.

African entrepreneurs have long been harmed by adverse regulatory conditions that make it more difficult to launch, build, and scale an innovative enterprise. For many businesses — particularly in nations like Nigeria, where elderly politicians reign over a young populace — the government often appears out of touch with their needs. Changing this view, which is a critical first step, requires new policy creation that prioritizes the interests of entrepreneurs, investors, and other stakeholders.

Startup Acts may be able to assist. Startup Acts are a collection of regulations intended to boost the incentives for young people to start businesses, investors to invest in potential enterprises, and other ecosystem actors to offer help where it is needed. Tunisia and Senegal, the two early adopters in this space, are implementing these rules as part of broader government initiatives to position their nations as innovation hubs by capitalizing on a developing technology scene to boost economic development.

What is a Startup?

Startups are young companies founded to develop a unique product or service, bring it to market and make it irresistible and irreplaceable for customers. Startups are rooted in innovation, addressing the deficiencies of existing products or creating entirely new categories of goods and services, thereby disrupting entrenched ways of thinking and doing business for entire industries.

The word ‘Startup’ has now become a popular buzzword , given the growth of the entrepreneurial culture globally yet it is surprising that there are still only a few countries which have passed legislation that actually supports the Startup ecosystem. They create more jobs which means more employment, and more employment means an improved economy. Not only that, startups also contribute to diversifying the economy by stirring innovation and injecting competition.

What is a Startup Act?

Startup Acts establish rules, policies, and in some cases, unique institutions that strengthen a country’s or jurisdiction’s entrepreneurial ecosystem.

Startup Acts provide financial and tax benefits to start-ups. For example, the incentive covers startup expenses, regulatory impediments, the establishment of organisations and funds that support entrepreneurship, and the establishment of an expedited process for intellectual property registration.

Secondly, the creation of a 200m (Two Hundred Million) Euro Fund of Funds, for disbursement to specific Small and Medium Enterprises (SMEs) sectors.

Thirdly, the creation of an operational strategy to consolidate the ecosystem and hubs in Tunisia. The Startup Act, which is in Arabic, has brought about impressive innovation, which has benefited the Tunisian economic sector. Some of these are:

As at December 2019, 169 of more than 279 companies which applied under the Tunisia Startup Act were granted the startup recognition. 37 (21.9%) of the 169 startups were run by female founders. About $18.5 million funding has been raised by all the startups so far.

Data from the official website of Entrepreneurs of Tunisia (EOT) reveals that startup coworking spaces in Tunisia increased by 61.2% from 38 in 2018 to 62 in 2019. There was also a significant increase in the number of startup founders across the country plus increased funding from investors, due to the business-friendly terms the Startup Act offers.

The Act, written in French makes some provisions as to the incentives and benefits a startup can partake of as a result of the Act.

The incentives are, but not limited to the following:

Why Do We Need a Startup Act in Nigeria?

In Nigeria, the laws that govern Startups and SMEs are found in different legislations, which makes for proliferation of taxes to be paid to numerous agencies. The legislations also provide for the payment of tax to different regulatory agencies. Some of these legislations are:

Using Tunisia and Senegal as case studies, and noting the economic developments the Act has brought about in Tunisia, having a Startup Act would be the next way forward.

The private sector accounts for up to 80percent of employment in the country and drilling further down, majority of the companies in this bracket are classified as micro and small businesses.

With major economic decline and a tough operating environment, the average Nigerian business owner becomes highly resourceful, however they are unable to lift themselves out of their income bracket.

A start up bill which will acknowledge the potential of start ups and provide assistance is long overdue. Fortunately, there is talk of the first draft of the startup bill being put before the National Assembly by August.

These are the major reasons why we need a Startup Act in Nigeria:

Nigeria has all to gain considering we are one of the economic giants in the African continent.