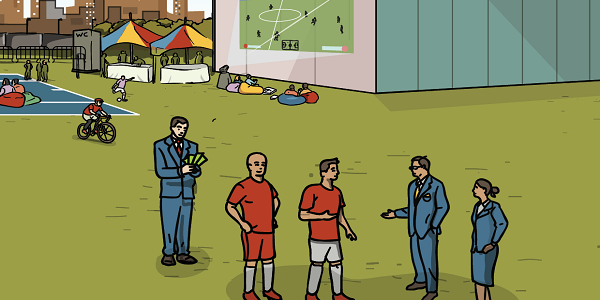 Despite FIFA’s outright prohibition on third-party ownership in football 2015, to remove unethical practices and mitigate the controversy surrounding this type of investment in football, TPO, as it is more commonly known, remains a regular occurrence in the football industry in places such as Nigeria.

A short precise definition of third party ownership also known as TPO  is “A financial interest in the future transfer of a player’s registration”.

It is a practice, previously widespread in South America, whereby an investor i.e. an individual, a company or a fund otherwise known as the third party would ‘invest’ in a player, in return for a right to enjoyment of future economic rights in the said player or club or academy i.e. take a percentage of the future transfer fees or fees that the player who is the subject of the investment attracts. This practice is peculiar to football because football is one of the only global sports with an open transfer market whereby players are traded domestically and internationally between clubs, and because of the substantial sums that can be exchanged in football transfer fees.

Third-party ownership in football is a business model whereby instead of Club A owning 100% of the player’s economic rights, these rights are shared with a third party who may either own a percentage share or on rare occasions all of the economic rights. This agreement is created through a private legal contract between the third party and Club A. The controversy in the practice of TPO is that it permits the TPO to be kept secret from those not privy to the private contract, even from the player concerned.

The issue of Third-Party Ownership in football (TPO) is one that has always attracted mixed reactions and has generated a lot of discussion and controversy. The drama surrounding Neymar’s transfer to Barcelona spiked general awareness on TPO. Neymar was signed to Santos Football Club in the beginning before he reached international stardom: In a bid to retain him on their squad and simultaneously leverage on his fast-rising superstar status, the club sought to increase his wages to the level of his counterparts in Europe.

However, since the club did not have the financial capacity to do so, a sports agency called DSI undertook to pay these high wages to Neymar on behalf of the Club. As a result, they owned 60% of the player’s economic rights. By the time Barcelona FC paid the transfer fees for the signing of Neymar, Santos FC only received 40% of the full fee.

TPO was a common practice in many parts of the world before FIFA banned it – in particular in Latin America whilst in Europe it was practiced in Spain, Portugal, and Italy. It enabled many smaller clubs to compete for side by side with bigger clubs by being able to purchase players with the help of third party investors holding some of the economic rights of the player.

Typically, a young promising player could be signed on to or from a club because a third party (with a right to the future transfer value of the player )would cover some of the costs the club or investment in the player. This would enable the player to perform on a bigger stage, provide the club engaging him with a promising player at a reduced price enabling it to compete with bigger clubs and often lead to the sale of the player to an even bigger club to the benefit of the selling club, the third party, and the player.

The fact remains that since Third-party ownership in football represents an investment, the investor’s primary interest is recouping a return on investment as fast as he can which can often conflict with the welfare of the player. Thus, it does not matter whether the player or the club wants something different, the will of the investor reigns supreme on whether the player moves on or stays. On the flip side, TPO actually helped a lot of smaller clubs to compete favorably with bigger clubs especially as it concerns transfers. With more funding from investors, smaller clubs could dream of signing players who could improve them on the sporting front as well as commercially.

TPO can arise in different ways. One of these ways involves the club selling a percentage of the economic rights of a player to a third party in order to raise funds. This is known as a ‘Financing TPO’. Sometimes, clubs obtain loan facilities using a percentage of economic rights of a highly valued player as collateral. In this case, the bank has acquired third-party ownership interests in the player.

Secondly, where a club cannot afford the transfer fee of a player, they could enter into TPO agreements with an investor who will fund a part of the transfer in exchange for a percentage of the Economic Rights of the player. This is known as investment TPO. A popular investor in this regard is Doyen Sports Investment owned by super-agent Jorge Mendes.

Thirdly, there is a form of Third-party ownership in football known as Recruitment TPO. This entails where a club wants to recruit a player who is not yet a professional. A third party could come in to finance the training and development of such a player on behalf of the club so as to make recruitment affordable for the club. It goes without saying that the third party then acquires economic rights in the player.

FIFA’s Ban on TPO in Football

The main problem with Third-party ownership in football, however, was the risk of Third Party influencers, i.e. the risk of third party investors unfairly influencing the playing or trading rules and regulations and policies of the engaging club. Third-party influence leads to a number of other problems – potentially undermining the integrity of the sport of football, especially where a third party has an interest in a number of players in the same competition, and undermining team stability where third parties are incentivised to force multiple transfers for economic and not purely sporty reasons.

FIFA noted that the legitimate objectives for the ban are as follows:

The Nigerian Position on Third-party Ownership

The practice of Third-party Ownership in Football in parts of Africa especially in West Africa where many of the talents are exported from to the west is on the rise. This is not surprising given the economic hardship and financial challenges faced by the talented footballers who majorly still come from less privileged backgrounds.

For these reasons, it is also not uncommon to find many players including some underaged ones ‘sponsored’ by a wealthier relative or even a stranger purely for the sake of benefitting from future financial or economic gains in the said player. A major reason we have seen why this practice is being perpetuated is simply for lack of awareness and because there are very few specialist sports lawyers who understand the rules and regulations surrounding football law.

TPO is akin to placing a bet on a wildcard in the hope that all upfront expenses and investments will be repaid with more once the player ‘makes it’.  This practice though has some benefits creates too many unequal playing fields and grey areas and one can begin to understand why FIFA had to place a global ban on TPO because there was a clear danger of TPO becoming a form of ‘modern-day slavery’ or economic slavery.

Despite the ban on TPO, it has not totally eradicated the practice perhaps due to ignorance and also desperation. Beverley is an Associate Partner and the Head of Sports, Entertainment & Technology (SET) group at OAL. She is a regulatory and compliance professional and a lawyer with over twelve years professional experience in the banking and capital markets sectors