The Offences of Murder, Culpable Homicide and Attempt-To-Murder in Nigeria

You are here:
ArticlesDispute Resolution & Litigation 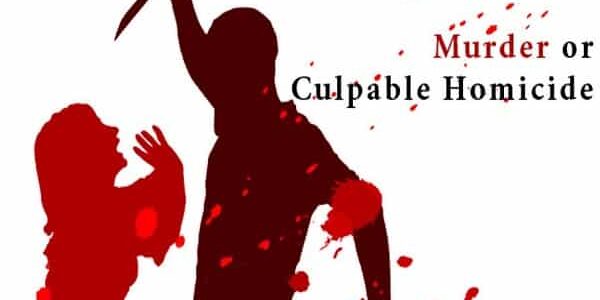 More than 400,000 people die globally from murder or culpable homicide each year. In Nigeria, murder, culpable homicide and attempt to murder are becoming alarmingly prevalent, generating public interest in existing laws that protect and prevent arbitrary deprivation of the constitutionally guaranteed right to life.

Where killing is unintentional in the southern states, it is termed “manslaughter” and in the Northern states, it is termed “culpable homicide not punishable with death”. Where an unsuccessful attempt to kill is made, it is called “attempt to murder”. This article will look at the legal definitions and general principles of the offences of murder, culpable homicide and attempt to murder and how the courts have applied these principles.

What is the Difference Between Murder, Culpable Homicide and Attempt-to-Murder?

Meaninging of Murder, Culpable Homicide and Attempt-to-Murder in Nigeria

Section 316 of the Criminal Code defines the offence of murder as follows:

“Except  as  hereinafter  set  forth,  a  person  who  unlawfully kills another under any of the following circumstances that is to say:

(c) If  death  is caused  by  means  of  an  act  done  in  the prosecution of  an unlawful  purpose, which  act is  of such a nature as to be likely to endanger human life;

(e) If death is caused by administering any stupefying or overpowering things  for  either  of  the  purpose  last aforesaid;

(f) If death is caused by willfully stopping the breath of any person  for  either  of  such  purpose,  is  guilty  of murder.

The offence of Culpable Homicide punishable with death is defined generally under section 220 of the Penal Code, thus:

(a) by doing an act with the intention of causing death or such bodily injury as is likely to cause death; or

(b) by  doing an act  with  the  knowledge that  he is likely by such act to cause death; or

(c) by  doing  a rash  or  negligent act to commit the offence of culpable homicide.”

Section 320 of the Criminal Code, defines Attempt to Murder as follows:

The ingredients of the offence of culpable homicide punishable with death are:  (a) That the deceased had died; (b) That the death of the deceased was caused by the accused (Actus Reus), and (c) That the act or omission of the accused which caused the death of the deceased was intentional with knowledge that death or grievous bodily harm was its probable consequence (Mens Rea). The proof of these is proof beyond a reasonable doubt, which does not mean proof beyond the shadow of a doubt.

However, on a charge of murder, the fact that the corpse is not found is immaterial because death is a fact that can be proved by circumstantial evidence. In other words, a corpse must not exist before an accused can be convicted, for where there is strong circumstantial evidence and where the prosecution succeeds in fixing the accused as the killer of the deceased, the only thing to consider is whether there is positive evidence that the victim is dead.

A pertinent question that often arises is the criminal responsibility of an accused person under the age of minority. By virtue of section 30 of the Criminal Code, a person under the age of 7 years is not criminally responsible for an act or omission, so also a person under 12 years but not less than 8 years, unless it is proved that at the time of doing the act or omission, he had the capacity to know that he ought not to do the act or make the omission. By virtue of section 319 of the Criminal Code, any person who commits the offence of murder shall be sentenced to death.

Like murder and culpable homicide, the burden of proving attempt to murder is on the prosecution. The Courts have held that to constitute an attempt, the act must be immediately connected with the commission of the particular offence charged and must be something more than preparation for the commission of the offence. It means that the act proved against an offender must be such as would show that he did all he needed to do to complete the act before it was stopped.

In the case of State v. Usman, the provisions of sections 221 and 222 of the Penal Code were considered. In the instant case, the accused was charged under section 221 (a) of the Penal Code for the offence of culpable homicide punishable with death for killing his wife, Aminatu Babawuro.

The PW1, one Abubakar Bakari who was the houseboy of the accused testified that one Saturday night in the month of May 1970, he heard the deceased wife crying. When he was later invited by the accused into the parlor, he saw the lifeless body of the deceased lying in a pool of blood. The accused then asked him to carry the corpse into a grave already dug by the accused and warned him not to tell anybody that he killed his wife.

A post mortem examination of the body of the deceased by PW6, a medical doctor showed that death was caused by severe loss of blood as a result of injury on the neck which might have been caused by a sharp   object. The accused denied the charge of killing his wife but said nothing about the testimonies of PW1 and PW6.

Dissatisfied with the judgment of the trial court, the prosecution appealed to the Court of Appeal contending that it proved beyond reasonable doubt the guilt of the accused as charged. The accused equally cross-appealed.

Unanimously allowing the appeal and dismissing the cross-appeal, the Court of Appeal held that the evidence of PW1 and PW6 established adequately that the accused actually intended the killing of the deceased, and that the accused did not come under any of the exceptions under section 222 of the Penal Code to make the trial court return a verdict of guilt for culpable homicide not punishable with death instead of culpable homicide punishable with death as charged.

In State v Iloduba & Ors (2020) LPELR-50593 (CA), the court was called upon to interpret Section 275 (b) Criminal Code Cap 36 Vol.2, Revised Laws of Anambra State. In the case, the first and third respondents (Obodoechina Iloduba and Chukwunonso Iloduba) seized and held the arms of one Lawrence Iloduba.

The 2nd respondent (Nwokike Egwuatu Iloduba) went to his house, brought out a machete and deliberately macheted Lawrence Iloduba on the head and hands. Blood was oozing out, which alerted people nearby to the scene of the incident. The wife of Lawrence Iloduba, on hearing the noise rushed to the scene and raised the alarm. Then one Kenneth Igweze intervened and rescued Lawrence Iloduba who seized the opportunity to escape from his assailants with the help of a commercial motorcyclist who took him to a nearby Police Station.

The respondents as accused persons were arraigned before the trial Court and they pleaded “Not guilty” to the charge. Witnesses were called and evidence was adduced with various documentary evidence admitted.

Thus, to constitute attempt, the act must be immediately connected with the commission of the particular offence charged and must be something more than preparation for the commission of the offence. It literally means that the act proved against an offender must be such as would show that he did all he needed to do to complete the act before it was stopped. The Court of Appeal held that it is obvious that there was an attempt to commit the offence of attempted murder.

In conclusion, the Nigerian Penal and Criminal Codes’ provisions on murder, culpable homicide and attempt to murder have remained the same over the years although the courts have tried to give it life by broad interpretations. However, recent legislations like the Administration of Criminal Justice Act of 2015 have put in place modalities to improve criminal proceedings and Administration of criminal Justice in Nigeria.

At OAL, our lawyers have the indebt knowledge and understanding of criminal prosecution processes and strategies. Our criminal prosecution practice group is made up of skilled lawyers with over a four-decade history of resolving complex criminal cases. We ensure prosecution is determined efficiently as to time, result and cost. We also provide specialized training and advocacy on administration of criminal justice in Nigeria.

Intellectual Property in Nigeria: A Summary of Protectable Rights in Nigeria
September 17, 2021

Dating and Romance Scams in Nigeria: All You Need To Know
September 7, 2021