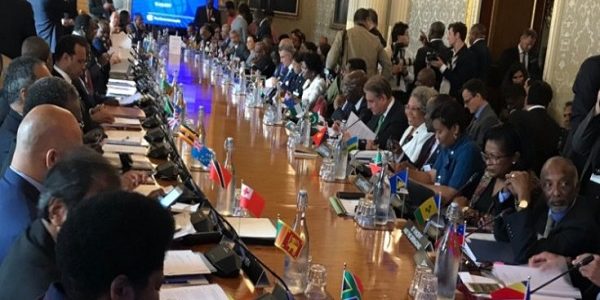 The Commonwealth Heads of Government Meeting (CHOGM) recently held in Malta. The Senior Partner of Olisa Agbakoba Legal was in attendance.

Whilst there, his attention was drawn to the fact that there were several opportunities just waiting to be tapped, for both Nigeria, as a whole, and individual entrepreneurs. Sadly, unlike other countries at the Meeting who had a very strong presence, save for Lagos State, our outing as a nation was abysmal and very unimpressive.

So, what is the problem? Why are we perennially bedeviled with such mediocre, poor and unimpressive outings? Could it be the same issues which have ailed us as a nation, chief of which is corruption?

Indeed the issue of corruption would appear to be the greatest disincentive and hindrance preventing our maximizing these opportunities, even when they are glaring us in the face.

Though admittedly, corruption, embezzlement and fraud, exist everywhere, what successful economies do is keep it to a minimum. No doubt, if as a nation, we can effectively combat and relegate to the barest minimum, corruption which has caused decay and rot in the system, we will have the energies to pursue worthwhile concerns and ventures. More importantly, we will be able to exude sufficient confidence and wherewithal to attract the right foreign collaborators.

It is hoped, therefore, that our efforts at fighting corruption will be successful and we will finally be able to move forward as a nation.

Below are some of the available business opportunities, which Dr Agbakoba, SAN, observed whilst attending the Meeting in Malta.

CHOGM as a Business Networking Platform

CHOGM is not just a biennial summit of the Heads of Government from all Commonwealth nations, it offers a golden opportunity for entrepreneurs, across the Commonwealth to meet and create mutually beneficial relationships. The main reason for this is that CHOGM has evolved from political to economic governance. In the past, CHOGMs have attempted to orchestrate common policies on certain contentious political issues and current events, with a special focus on issues affecting member nations. More recently, beginning at the 1997 CHOGM, has moved to emphasize economic governance, without which political governance would remain problematic.

To this end, this year’s CHOGM was themed, “Adding Global Value”. Adding Global value is about using the Commonwealth’s strengths in international politics to influence and eventually effect change on important global issues. It is also about making a positive difference to the lives of Commonwealth citizens.

Considering the role of economic reform/reconstruction, as a key value driver, CHOGM has clearly shifted focus to economic/business matters that throw up Massive Opportunities for collaborations, building lasting networks, exchanges that position the private sector as the engine of growth. For illustration: the Economic and Investment Council of the forum, is aimed at creating an economic block to harness the opportunity available in a 2.2 billion people population.

The Maltese have a strong affinity for business- Maltese Nigerian Business forum. There were a few banks looking to tap into the business opportunities in Nigeria, with regards to set up, consultancy and other available services which could be rendered. Given, however, that the biggest banking fraud was orchestrated by Nigerians, we must weed out corruption and build a strong system of justice that people can trust. In this regard, therefore, there is a need to set up both institutional and legal frameworks to safeguard against occurrences such as this and assure investors certain measure of security.

There are advisory and training opportunities in a multiplicity of areas like stock exchange, maritime, human rights, development, Strategy and Planning. Wealth creation is the result of well deployed strategy.

Networking and building mutually beneficial relationships are the best way to go in 2016. Wealth comes to those who make deals not fees. With the Country’s current ranking and reputation in corruption however, it will be difficult to attract the right kind of deals, hence we must be determined in our resolve against corruption if we will move forward, because it cannot be over emphasized that corruption hinders businesses. Malta teaches that in matters of sale, you must have a strategy and the fire to sell. Many member countries, like Ghana, Cameroun, Countries in the East Africa and the Caribbean were on fire to sell, but Nigeria appeared ill prepared. There are therefore lots of untapped opportunities in Nigeria if only we can focus on the right values and harness the opportunities.

CHOGM holds every two years. As a member State of the Commonwealth, we need to prepare adequately in advance. Poor planning leads to poor results. If we seize the opportunity to adequately prepare we will have a better outing at the next meeting than we did this year. Nigeria’s fight against corruption is however going to be very key and instrumental in determining our prospects and how productive the opportunities become. In conclusion, Pratibha Patil, could not have put it more succinctly when she said “Corruption is the enemy of development, and of good governance. It must be got rid of. Both the government and the people at large must come together to achieve this national objective”.