You are here:
OAL NewsPast Events 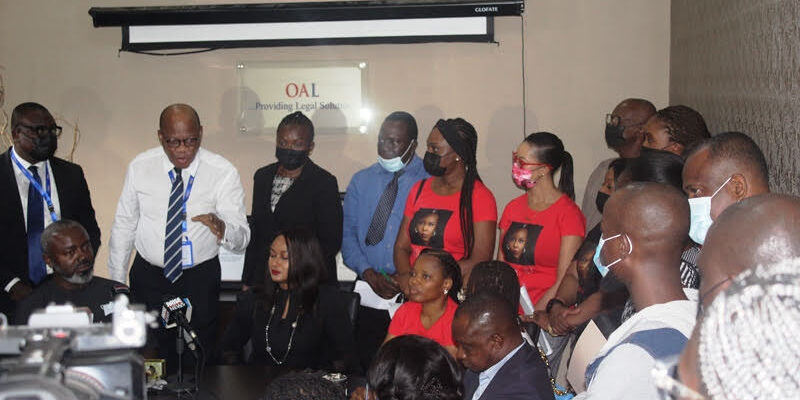 The family of the late Peju Ugboma, supported by friends, colleagues and their lawyers, held a Media briefing on the painful loss of their wife, sister, Aunt, daughter, on Tuesday May 18, 2021 at our Ikoyi office.

Our Managing Partner, Mrs. Yvonne Ezekiel at the briefing said Olisa Agbakoba Legal(OAL) has been retained to act as lead counsel to the late Peju Ugboma’s family. She added that Peju Ugboma died in unclear but suspicious circumstances on 25 April, 2021 at Evercare where she was rushed when the surgical operation at Premier Medical Centre went tragically wrong.

“You have heard from the husband of late Peju Ugboma about the unfortunate and tragic events. The family is convinced that this is a case of gross medical negligence/ malpractice”.

Her argument was summarized as follows:

An independent autopsy was performed, but we are awaiting the results. We sought and received her medical records from the different hospitals she visited prior to the surgery. Citizens Medical Centre Ikoyi, Medisin Medical Lekki, MeCure Lekki, and George’s Memorial Lekki all provided us with her medical records. Only Premier has declined to submit the report; a petition has been filed with the Medical and Dentist Disciplinary Council of Nigeria to examine the matter; a petition has also been filed with the Nigerian Medical Association; a coroner’s inquest has been requested; and a letter to the Lagos State Health Facilities Monitoring and Accreditation Agency’s Executive Secretary demanding an investigation of the hospital’s facilities and the hospital’s temporary closure. We insist that the hospital premises be inspected, as well as assurance of the hospital’s license and accreditation to conduct major operations. Blood clots, serious illnesses, hemorrhage, bowel obstruction, and urinary tract injuries are all risks associated with hysterectomy. As Premier Specialist Hospital performed the procedure on Peju, it lacked CT scan equipment and a blood bank, prompting a petition to the Lagos State Attorney General. The matter is currently being handled by the Director of Public Prosecution for Lagos State (under the Attorney General’s office), a petition has been filed with the Consumer Protection Council (CPC), a petition to the Nigerian Police’s Panti Homicide Department is under consideration, and a petition has been laid before the State House of Assembly to trigger a public discussion on health policing with the title “THE PEJU UGBOMA HEALTH REFORM INITIATIVE”, and a full investigation into Peju’s tragic death will be carried out. For medical malpractice and negligience, doctors should be held accountable.