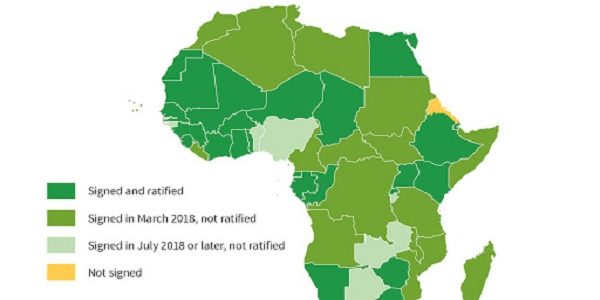 The African Continental Free Trade Agreement was signed by President Muhammadu Buhari at the African Union Summit on Sunday, July 7, 2019.  At the summit, member countries agreed to launch the “operational phase” of the African Continental Free Trade Area (AfCFTA), and decided on common “rules of origin, the monitoring and elimination of non-tariff barriers on goods and services, and the creation of  a unified digital payments system and an African trade observatory dashboard.

The implementation of the African Continental Free Trade Agreement (AfCFTA) will be guided by five operational instruments, i.e. the Rules of Origin; the online negotiating forum; the monitoring and elimination of non-tariff barriers; a digital payments system and the African Trade Observatory. The implementation of AfCFTA will create the largest free trade area in the world given Africa has a current population of 1.2 billion people, which is expected to reach 2.5 billion by 2050.

Planning for the agreement commenced in 2013 with negotiations at various AU Summits.  The first negotiation forum was held on February 2016, eight meetings were held until the Summit in March 2018 in Kigali. Starting from February 2017, the technical working groups held four meetings, where technical issues were discussed and implemented in the draft.  In March 2018 the African Union Ministers of Trade approved the draft Agreement.

The effect of the implementation of  AfCFTA will be the creation of a truly Pan-African single market or regional trade bloc with free movement of goods and services. Although currently there is no free movement of persons across the continent, it is left to be seen how the AfCFTA will truly work in reality. In order to properly understand AfCFTA, we can take a step back and understand the fundamentals of a regional trade bloc.

A Regional Trade Bloc (RTB) refers to a group of countries or co-operative unions within a geographical trade boundary that adopts preferential trading policies with one another. Such trade blocs are desirable because it promotes stronger economic integration due to the harmonization of trade tariff policies.

Historically there are four types of trade blocks:

Preferential Trade Areas (PTAs), the first step towards making a full-fledged RTB, exist when countries of a particular geographical region agree to decrease or eliminate tariffs on selected goods and services imported from other member states.

A customs union has no tariff barriers between members, plus they agree to a common (unified) external tariff against non-members. Effectively, the members are allowed to negotiate as a single bloc with third parties, including other trading blocs, or with the World Trade Organisation.

The signing of the African Continental Free Trade Act will definitely propel and enhance trade and development for member countries and the African continent as a whole. The free trade area will ‘amplify the potential for economic transformation in the region. It will boost not only intraregional trade, but it will also attract foreign direct investment and facilitate the development of regional supply chains which have been key engines of economic transformation in other regions.’ The advantages of having a Free Trade AREA are as follows −

It will increase Foreign direct investment (FDI) which will ultimately improve the business environment as it benefits the economies of participating nations.

The larger markets created results in lower costs due to mass manufacturing of products locally. These markets form economies of scale.

It will act as a catalyst for economic diversification.

The increased consumption, the changes in demand, and a greater amount of products result in an efficient market.

Moreover, it will increase Nigeria’s capacity to meet the goals of its Economic Recovery Growth Plan (ERGP).

There are concerns about the dumping of goods of inferior quality in other member states.

As tariffs are removed, the cost of imports goes down. Demand changes and consumers become the king.

The countries of a bloc become interdependent on one another. A natural disaster, conflict, or revolution in one country may have an adverse effect on the economies of all participants.

The figures raise several questions. The factors that have affected trade integration in Africa are a result of tariff and non-tariff barriers. Considering the non-tariff barriers first, one of the major reasons is due to the fact that the economies of most African countries remain mono or bi-product in terms of commodities, with a restricted market, competition cannot thrive. Other key factors such as poor logistics, transport, infrastructure quality,  payment and credit challenges have made intra trade extremely costly and consequently has impaired trade integration and harmonisation until recently in Africa.

Tariff barriers have for the longest time presented a big obstacle to trade integration. Charges such as varied licenses, duties, charges across Africa can make it very difficult to trade successfully. It is expected that by eliminating trade tariffs on 90 per cent of currently taxed intra-regional trade inflows, trade flows may potentially increase by about $16 Billion or about 16 per cent over recent average levels.

Independent organisations like African Export-Import Bank (AFREXIM) have expressed commitment by contributing $1Billion to support trade in Africa through two key pillars – driving the level of inter African trade and through the facilitation of industrialisation and policy development. The President of the Bank, Professor Benedict Oramah explained that the facility was to enable countries to adjust to sudden significant tariff revenue losses as a result of the implementation of the agreement. Afrexim has confirmed the launch of the Pan-African Payment and Settlement System (PAPSS) which will serve as the much-needed platform to facilitate and support payment of goods and services in Intra-African trade in African currencies, not the dollar. It will domesticate intra-regional payments and formalise a significant proportion of the estimated 50 billion dollars of informal intra-African trade.

The role played by AFREXIM will support trade and enable infrastructure investment in special economic zones.

The private sector also has a role to play to make this a successful integration through addressing the skills gap, reducing the level of skilled labour shortage; professionals in support sectors such as lawyers,  business consultants, etc must build competencies in international trade, corporate governance and quality control.

Trade and investment are related concepts and for both to thrive, certain factors must be present. Factors that have continued to hinder Africa’s participation in global trade are power and transport challenges. Transport costs alone can account for up to 75% of the cost of doing business alone. These factors continue to undermine competitiveness and majorly restrain ease of trading.

There is an urgent need to accelerate the level of infrastructure in Africa. One way of doing so is through the creation of special economic zones.

A special economic zone is a special deregulated enclave created within an economy which is created for the purpose of attracting investors to the area, to take advantage of the liberalization which is usually in the form of low or non-existent tariffs and taxes. Import and export within the SEZ are free.

Globally SEZ employs up to 69 million people worldwide. China used the SEZ model to stimulate its FDI and promotion of export-oriented industrialization.

The AfCFTA presents enormous opportunities but it is important that each member state is required to show long term commitment to the successful operation of the regional bloc.

Some of the ways it can show commitment can be through:

What is the Future of the African Continental Free Trade Area?

Africa with its large young population and labour force has enormous potential and capacity for trade integration when properly deployed. According to Vera Songwe, executive secretary of the United Nations Economic Commission for Africa, the implementation of the AfCFTA has the potential to increase the value of regional trade by between $50 billion and $70 billion by 2040 solely due to the removal of tariffs. Dismantling tariff barriers is a first step to showing real commitment towards the creation of an African single market but the reality is we need to look beyond the tariff barriers. Until there is proper harmonisation and free movement of goods, services including people, the single market may not work optimally as compared with other regional blocs including internal regional blocs in Africa such ECOWAS, COMESA and the European Union. Strong regulatory frameworks and policies are also required to support the implementation of the single market.