You are here:
ArticlesSports Entertainment & TechTechnology 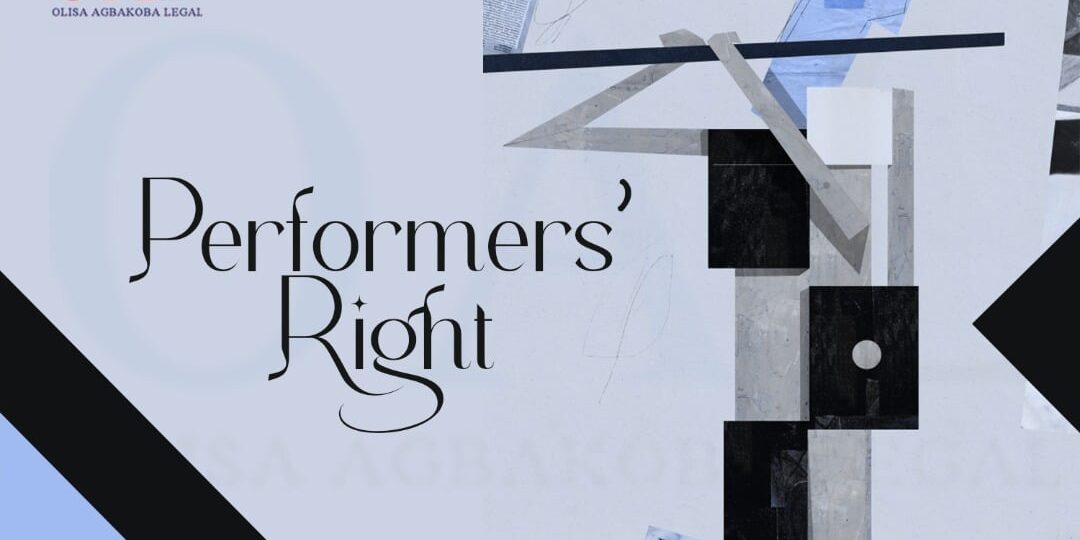 The creative industry in Nigeria has turned what is often considered ‘informal work’ into a hub for exporting Nigeria’s culture with a revenue of about 4.5 billion dollars[1] Creative performers such as musicians, dancers, actors and comedians amongst others have contributed 3 per cent to the global economy. As such, there is a need for performers (creative) to know about their rights in order to thrive in such a lucrative industry. In this article, Performers’ Rights, we will explore the concept of performance rights, and explain why they are so important.

It is important to understand who a performer is. The word “performer” was not defined in the Nigerian Copyright Act[2] however what constitutes performance was stated. The term “performance” was defined to include, dramatic performance (including dance or mime), musical performances and a reading of a literary act or any similar presentation which is a live performance.[3] The act refers to Performers’ Rights as neighbouring rights while in other jurisdictions, they are referred to as “related rights”.[4]

Performers’ Rights are the exclusive legal rights performers have in relation to their performances; this includes the performing, recording, broadcasting, reproduction and adaptation of their performance[5] for a period of fifty (50) years, from the end of the year their first performance(s) took place.[6] For example, the live performances of Michael Jackson and other artists still enjoy protection today. In 2018, the Estate of Michael Jackson filed a federal copyright infringement lawsuit against the Walt Disney Company and ABC TV, alleging the companies used dozens of copyrights without permission when the TV network aired “The Last Days of Michael Jackson” and other Jackson’s music videos.[7]

For a work to qualify for protection in Nigeria, such work must be original and fixed in any definite medium of expression known or later to be developed. [8] The work must have first been published in Nigeria or covered by any international agreement or treaty such as the International Convention for the Protection of Performers, Producers of Phonograms and Broadcasting Organization,[9] WIPO Performances and Phonograms Treaty[10] etc for which Nigeria is a signatory. However, ideas or concepts are not protected; rather, it is the way such ideas or concepts are expressed that is protected.

Performer rights ensure that performers are properly compensated for their artistic work(s), and help to support the creation of new work(s). It has been argued by some schools of thought [11] that compensation for work is an incentive for more creative work in the world. This is rooted in certain fundamental ideas about creativity and possession. It springs from the idea that no one should reap where he has not sown, with the primary objective of ensuring that those who create works are adequately rewarded, as copyright protects from annexation, the fruits of one’s labour. [12]

Section 28 of the Act[13] provides that a performer’s right is infringed when a person without authorization or consent of the right holder does any of the following, that is:

For example, if a radio station plays a song without permission from the artist first or without a license for protected works not in the public domain and/or not covered under the fair use doctrine, that will be an infringement of the performance right. If a record label makes copies of an artist’s album without permission, that’s also an infringement for which the infringer could be sued, as an infringement of a performer’s right is actionable.[14]  In 2019 Global Music Rights, a group that represents artists such as Drake and Bruce Springsteen sued radio station owner Entravision Communication Corp. for allegedly playing its songs without paying songwriters. Entravision was alleged to have played more than 130 of Global Music Rights’ songs a total of more than 10,000 times over the past couple of years, according to the lawsuit, which was filed in federal court in Los Angeles. The most-played songs include Steve Miller’s “Fly Like an Eagle,” Metallica’s “Enter Sandman” and Pearl Jam’s “Black.” Global Music Rights in that suit sought $150,000 for each infringement in damages.[15]

Infringement of a performer’s right can attract either civil or criminal liability. Under a civil action, the performer shall be entitled to damages, injunction, account for profit or conversion and forfeiture of any recording in the custody or control of the infringer to the right holder.[16]  For instance, it was reported in the news that the Lagos Division of the Court of Appeal ordered Multichoice Nigeria to pay N5.4 billion as damages to the Musical Copyright Society of Nigeria for copyright infringement.[17]

In the case of criminal liability, unless an infringer proves to the satisfaction of the court that he did not know that his conduct was an infringement of performers’ rights, the infringer shall be liable on conviction to wit:

A court before which a criminal liability offence for performance right infringement is tried shall order that the recording or any other part thereof be delivered to the performer.[18]  For instance, in 2019, Steven King was jailed for more than seven years for selling illegal devices, providing unauthorized streams of premier league matches and ordered to pay 1m pounds following a court ruling.[19]

Impact of Violation of Performers’ Rights

The violation of performers’ rights often has a negative impact. This is because artists are not able to get paid for their work. When people infringe on a performance right, they are taking away potential earnings from the performer. This makes it difficult for the performer(s) to make a living, which in turn can impact the quality and quantity of work that is produced.[20]

By ensuring that performers are compensated for their work, performers’ rights create an incentive for creativity and innovation which ultimately leads to the creation of magical performances that is of immense value to us all. It is crucial that performers see Intellectual Property Rights (IPR) as a personal right and value their performance right from the beginning and take adequate steps to protect it legally.[21]