You are here:
ArticlesDispute Resolution & LitigationReal EstateReal Estate and Property 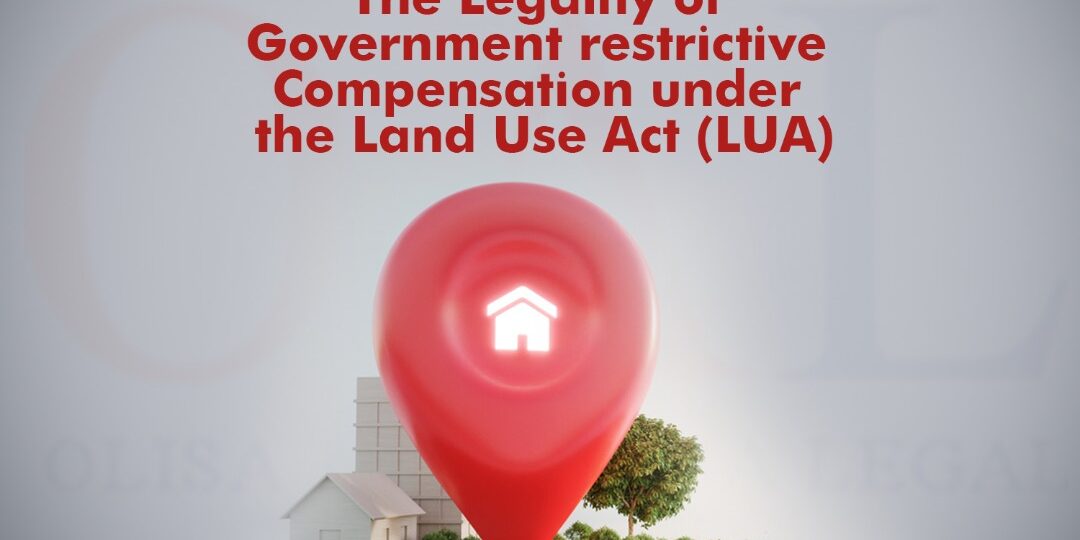 The right to property is central to human existence and it is a fundamental pillar of all democratic societies. The rights of every citizen of Nigeria to own movable or immovable property in any part of the country is guaranteed under section 43 of the 1999 Constitution of the Federal Republic of Nigeria (As Amended).  Prior to the promulgation of the Land Use Act (LUA), there was trenchant public concern over the astronomically high cost of land in Nigeria. This posed tremendous difficulties not only to individuals but also to governments in need of land for sundry development purposes. Land ownership was relatively concentrated in the hands of few influential persons in the society who most often than not refuse to release these lands to the government for the purposes of providing infrastructural development that will benefit the public at large. Even when it is released to the government, it is released at a cost far above its market value. The gap between the rich and the poor continued to widen as land ownership is kept outside the reach of poor Nigerians.

With the promulgation of the Land Use Act, absolute ownership of land is no longer permissible since by virtue to section 1 of the Act, all lands comprised in the territory of each state of the federation were vested in the Governor of the State and such lands are held in trust and administered for the common benefits of all Nigeria.

As a corollary to the ownership rights vested in the Governor, private rights were limited to a mere possessory right referred to as the “Right of Occupancy” usually granted for an ascertainable period. An inherent component of the Vesting Right and Right of Occupancy introduced under the Land Use Act, is the power of eminent domain (otherwise known as Power of Revocation, Compulsory Acquisition, Compulsory Purchase), which is the power the Governor of to “Revoke” Rights of Occupancy issued to private persons/companies for overriding public interest, however subject to the prompt payment of compensation.

Compensation regime under the Constitution

The rights of every Nigerians to own and acquire immovable properties in any part of Nigeria, is guaranteed by section 43 of the Constitution. The same Constitution also recognized the powers of the Governor of a State to acquire and/or revoke private rights in land for overriding public interest but however subject to prompt payment of compensation. The Government’s powers to acquire lands compulsorily stems from section 1 of the Land Use Act, 1978 which vests all lands in the Governor as Head Lessor. Thus, the Governor may in the overriding public interest acquire private land subject to the enabling statute and failure of which the acquisition will be rendered void. The purpose of the government to compulsorily acquire lands is mainly to ensure that land is readily available when needed for essential infrastructure. Despite being a necessary governmental tools, the issue of compulsory acquisition has proved to be a source of worry and conflict in Nigeria between the acquiring authorities and the dispossessed landowners. Cases of loss of lives and property occasioned by the exercise of expropriation power are on the rise across nooks and crannies of the country. Section 44 (1) provides as follows;

Flowing from the above provision of the Constitution, the government is mandated to pay prompt compensation for any interest in and over land compulsorily acquired from private individuals. The Constitution specifically used the words “immovable properties” which is described in Black’s Law Dictionary, Osbourne Concise Law Dictionary and Nigerian Law Dictionary, to include; land and property attached thereto. Consequently, by the provisions of the Constitution, compensation is payable in respect of all immovable properties (bare or developed lands). The Constitution further gives individuals whose rights were compulsorily acquired, the right of access to court of law or tribunal for the determination of their interest in the property and the amount of compensation payable to them.

Compensation Regime under the Land Use Act

Section 28 of the Land Use Act empowers the Governor of State to revoke private rights over land for overriding public interest. By the provision of Section 28 (7), the title of the holder of a right of occupancy shall extinguished on receipt by him of a notice given under the hand of a public officer duly authorized in that behalf by the Governor or on such later date as may be stated in the notice. Section 29 subsection (1) and (4) provides that the holder and the occupier shall be entitled to compensation for the value at the date of revocation of their unexhausted improvements; and compensation under subsection (1) of this section shall be, as assessed as follows – (1) the land; for an amount equal to the rent, if any, paid by the occupier during the year in which the right of occupancy was revoked. This provision only affects Occupiers of land and not the Holder of Right of Occupancy. Consequently, if the Occupier occupies the land rent free, he will not be entitled to compensation. (2) buildings, installation or improvement; for the amount of the replacement cost, less depreciation, together with interest at the bank rate for delayed payment of compensation; (3) crops on land, for an amount equal to the value as prescribed and determined by appropriate officer. Section 51 defined improvement or unexhausted improvements to mean anything of any quality permanently attached to the land, directly resulting from the expenditure of capital or labour by an occupier or any person acting on his behalf, and increasing the productive capacity, the utility or the amenity thereof and includes buildings, plantations of long-lived crops or trees, fencing, a well, roads and irrigation or reclamation works, but does not include the result of ordinary cultivation other than growing produce.

The purport of the above provisions of the Act is that payment of compensation is restricted to improvements on the land and therefore does not extend to bare land. We submit that this negates the provisions of section 44 of the constitution which mandates the payment of compensation on all immovable properties (bare and developed lands) forcefully acquired by the Government.

For the determination of the quantum of compensation payable to persons whose rights were compulsorily acquired, section 2(2) of the Land Use Act, created an advisory body known as Land Use Allocation Committee charged with the responsibility of advising the Governor on any matter connected to management of land, resettlement of persons affected by the revocation and determining disputes as to the amount of compensation payable for improvement on land. By the provisions of section 47 of the Act, any decision reached by the Land Use Allocation Committee as to the quantum of compensation payable to an aggrieved person whose right of occupancy was compulsorily acquired, is final. In other words, the jurisdiction of the Court to enquire or interfere in any dispute relating to payment of compensation is ousted by the Act.

Supremacy of the Constitution over the Land Use Act.

“Nothing in this Constitution shall invalidate the following enactments, that is to say;

Having established that the Land Use Act is merely an existing Act and not part of the Constitution, we humbly submit that the provisions of the Land Use Act which limits the payment of compensation for private properties compulsorily acquired by the Government to only unexhausted improvements on the land, is unconstitutional in that it violates the provisions of Sections 43 & 44 of the Constitution of the Federal Republic of Nigeria (as amend) which extends the right of compensation to all immovable properties, bare lands inclusive.