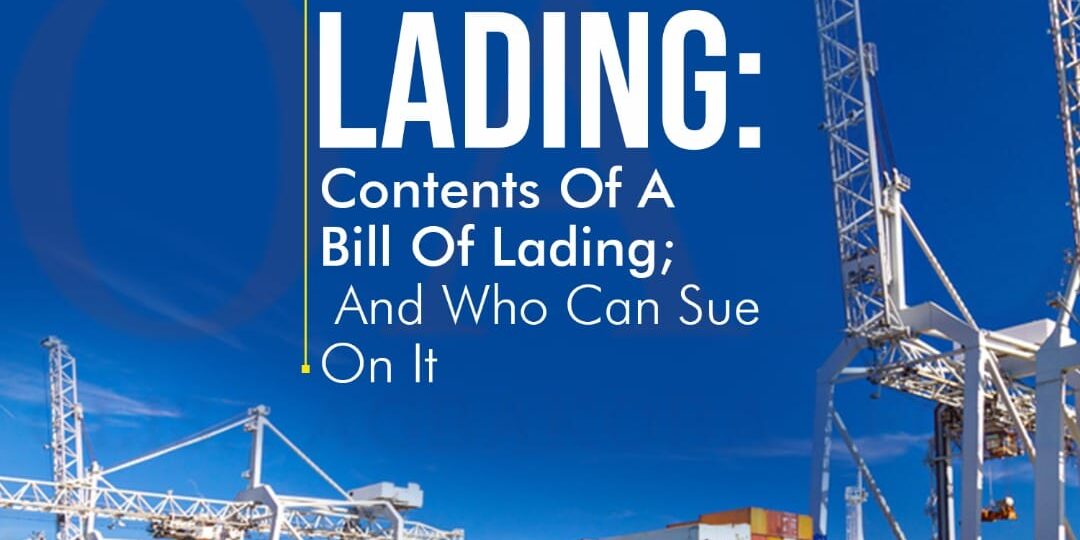 A Bill of Lading is an instrument in writing, signed by a carrier or his agent, describing the freight so as to identify it, stating the name of the consignor, the terms of the contract for carriage, and agreeing or directing that the freight be delivered to the order or assigns of a specified person at a specified place. It is a receipt for goods, a contract for their carriage and documentary evidence of title to goods. see THE VESSEL “LEONA II” V. FIRST FUDS LTD. (2102) 18 NWLR (PT.799) 439 SC.” PER NGWUTA, J.S.C. (P. 45, PARAS. C-E) –

In BASINCO MOTORS LTD vs. WOERMANN-LINE (2009) LPELR (756) 1 at 27-28, the apex Court (per Adekeye, JCA) examined the meaning of the bill of lading stating: “A bill of lading is defined in Blackburn on Sale 3rd Edition at page 27 as a writing signed on behalf of the owner of the ship in which goods are embarked, acknowledging the receipt of the goods, and undertaking to deliver them at the end of the voyage subject to such conditions as may be mentioned in the bill of lading. The bill of lading is therefore a written contract between those who are expressed to be parties to it. A bill lading has two main functions: –

Furthermore, a bill of Lading is a contract between the ship owners/carriers, the shipper/consignor on one part and the consignee/endorsee on the other part. See ADESANYA V. LEIGH-HOEGH 1968 1 ANLR P.330, ALLIED TRADING CO. LTD V. G.B.N. LINE 1985 2 NWLR PT.5 P.74

A bill of Lading contains a contract and that contract is the carriage of goods. To sue on it, one must be a party to the contract see ARTICLE III SUB-PARAGRAPHS 4 OF CARRIAGE OF GOODS BY SEA ACT 2004.

It is however now settled by a plethora of cases that by virtue of Section 375 (1) of the Merchant Shipping Act 1990 only a consignee of the goods named in a bill of lading or an endorsee whom the property in the goods have passed and by virtue of those facts will be able to sue on a bill of lading contract. A notify party or addressee cannot therefore possibly be a party to the contract evidenced in the bill of lading. Furthermore, a plaintiff or an alleged owner of a consignment who was not an endorsee of the bill of lading but merely a holder of the original copy does not have a right to sue on the contract.

Clearly, a notify party is the party whose name and address appear in a bill of lading and who is to be notified by the shipping company or its agent of the arrival of the goods at the discharge port. The notify party is often an agent for the receiver of the goods who arranged for their clearance and transport to the receiver’s premises. However, a party can be a Notify Party and a consignee under the same bills of Lading, but this fact must be clear for all to see on the bills of Lading.

It is safe to hold that, a notify party or addressee cannot therefore possibly be a party to the contract evidenced in the bill of lading. A notify party or addressee has no right of audience on the bill of lading, either in contract or tort of negligence. Even in an action for bailment, it is not possible to make a party whose name appears only in regard to notification of the arrival of the consignment assume the role of a bailor or bailee.

It is rudimentary law of contract that a contract cannot be enforced by a person who is not a party to the contract even if the contract is made for his benefit. See REBOLD INDUSTRIES LTD VS. MAGREOLA (2015) LPELR (24612) 1 at 26

SECTION 375 (1) OF THE MERCHANT SHIPPING ACT 1990 provides for the rights of the consignee of goods and endorsee of bills of lading. So for a party to take advantage of the provision, he has to either be a consignee or endorsee of the bill of lading.

Construing the provisions of Section 375 of the Merchant Shipping Act, 1990, the apex Court per Adekeye, JSC stated as follows in BASINCO MOTORS LTD vs. WOERMANN-LINE (supra) at 31-32:

“I must emphasise that locus standi to sue on a bill of lading either in contract, bailment or Negligence in Tort is statutorily derivable from Section 375 (1) of the Merchant Shipping Act, Cap. 224 Laws of the Federation, 1990. It cannot vest on the appellant by any act of the parties in the circumstances of this case.

Consequently, it follows that the locus standi to sue on a bill of lading depends on whether the Plaintiff is a consignee or endorsee on the bill of lading.

It is crystal clear from the above provisions that it is not every consignee or indorsee of a bill of lading who may have a right to sue on it, but only a consignee or indorsee to whom the property in the goods mentioned therein shall pass upon by reason of such consignment or indorsement because, at that juncture, he would have transferred to and vested in him the right to sue and the reciprocity of the corresponding liabilities relating to such goods.